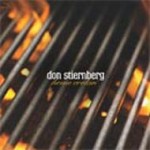 Don Stiernberg is widely acknowledged as one of the world’s foremost jazz mandolinists. He is also a terrific guitarist and a fabulous singer. In “Home Cookin’,” Don’s fifth release on Blue Night Records, he wears all three hats. Once again joined by bassist Jim Cox, and with contributions by some of Chicago’s hottest session guitarists and percussionists, he offers up musical dishes tinged with blues soul, Brazilian spice, and other exotic ingredients.